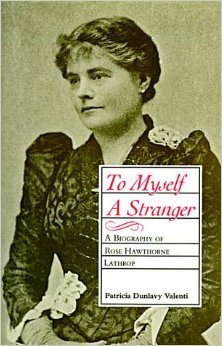 To Myself a Stranger: A Biography of Rose Hawthorne Lathrop

Rose was born in 1851, the youngest child of Nathaniel and Sophia Hawthorne. As an adult, she reflected upon her sense of alienation and a childhood that "made me seem to myself a stranger who had come too late." Throughout much of her life, Rose found her identity subsumed by the demands or accomplishments of those closest to her. Her sister Una’s fragile health often consumed the family’s attention. Not only Rose’s famous father but also her brother, Julian, seemed to overshadow her. He achieved a degree of literary fame in his own right, and her husband, George Parsons Lathrop, was a successful writer and the editor of her father's works. Rose also pursued a career in writing, and after the death of her only child in 1881, she enjoyed moderate success with the publication of her poetry and stories. Valenti reads these with a biographer's eye, finding in them clues to the remarkable transformation that propelled Rose beyond Victorian constraints to realize her singular gifts. In 1891, she and her husband shocked their circle of literary and artistic friends by converting to Catholicism. Five years later, even more shockingly, Rose left George to establish an order of nuns dedicated to the care of society’s dying outcasts, for cancer was then believed to be highly contagious and its victims were shunned. Taking the name Mother Mary Alphonsa, she devoted the rest of her life to this work, which is continued today by the Servants of Relief for Incurable Cancer. Her belief in each individual’s right to die with dignity establishes her as a visionary and a pioneering advocate for compassionate, palliative care of the dying.